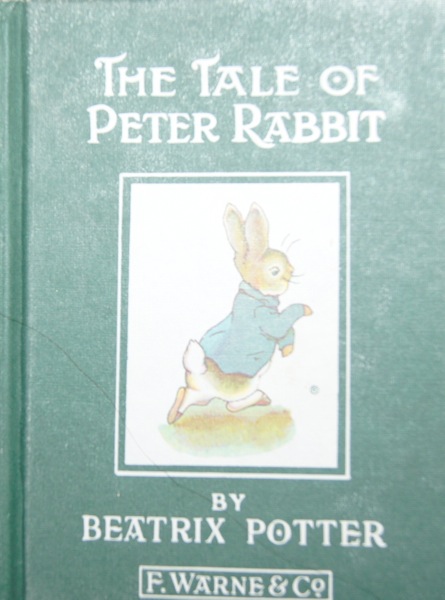 As it is good to do with almost-three-year-olds, I asked her again the next day.

But then, for two weeks, every time I asked…

And so a Peter Rabbit 3rd Birthday Party it is.

The Picture Book House copy of The Tale of Peter Rabbit by Beatrix Potter (Frederick Warne & Co., Inc.) was mine as a child. It still bears my Dad’s distinctive, all cap “NIES” on the first page (see below).

Before I had pulled this little green book as one that I wanted to read to my daughter, she pulled it and said, “Mommy, read this to me.”

As I’ve said, my daughter loves small books. She sat on my lap and listened to every word of this lengthy (for a 2-year-old) tale. And then of course, we read it again.

A few days and five or six reads later, I found my daughter sitting exactly as her Bubba, my Dad, does when he reads (legs crossed, feet rubbing against each other, book folded cover to cover so that the spine squeaks). I listened over her shoulder…

To my mom ears these bits and pieces, delivered as they were in correspondence with the page upon which they were actually written, sounded as perfect as I imagine the story would sound were it to be read by Ms. Potter herself.

In just the few short months since this accomplishment, there are fewer bits and pieces and more full sentences and pages when my daughter sits down to read Peter Rabbit.

We’ve invested in a Peter Rabbit puzzle and the BBC Peter Rabbit DVDs. We’ve made Peter Rabbit, Mr. McGregor and Flopsy, Mopsy and Cotton-tail puppets, and now the tale is most often told from behind the shower curtain/puppet stage we have rigged up in the basement.

We are madly in love with Peter Rabbit, as it seems many are during this bunny time of year.

When I walked into B&N a few weeks ago and saw the Peter Rabbit display, my initial reaction was, “I have to get my daughter more Peter Rabbit books!” But after smelling them, studying the jacket art and reading excerpts, there were none that I thought she would love as much as she loves the original.

The last six months of my life, when my daughter went from being two and a half to three, have been our Peter Rabbit months, and I’m so glad she picked him for her party.