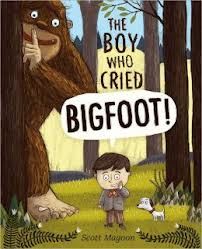 Last spring, when the buzz about The Boy Who Cried Bigfoot by Scott Magoon (Simon & Schuster, 2013) was buzziest, I bought it.

But then, because the pages were dark (one even pitch black), and because Ben, the boy who cries “BIGFOOT!” makes sort of nasty faces, and the narrator (who it turns out is Bigfoot), narrates things like, “It seemed Ben found being alone to be a little scary,” on the pitch black page, I buried the book at the bottom of the new book pile, hoping that maybe my daughter wouldn’t find it.

The book begins: “This is the story of my friend Ben and how we first met.”

Ben is smiling, riding his bike. There is a cute little white dog chasing after him.

The entire page (including Ben and the dog) is a pinkish/red hue. To the East of this page, the sun is rising.

The next page, a bit less red, more pink—the sun must be higher in the sky now, reads: “This is Ben.” And next to Ben, who is still riding his bike, are the handwritten words: “Ding! Ding!”

By the third spread the sun has risen high enough that that page is white (by the fourth it is mid-day, and blue), and the text reads: “Ben liked to tell stories.”

And in a different handwriting, Ben’s text bubble reads, “‘Look, Everyone! It’s Bigfoot!’”

Ben’s tried mother, his crying baby sister, and his pesky little sister, “Well, I don’t see him,” come running to see Bigfoot, as do, a few pages later, a handful of “…people…from all over the town…”

“They waited and waited, but the creature never appeared.”

Even though Ben is, “…a tenacious little fellow…” and does things like make fake foot prints and yell with his arms failing: “He IS real! His feet were THIS BIG! He was right here. I saw him!” he is unable to prove it.

And so, in the middle of the book a frustrated Ben and his dog (who is as fed up with Ben’s antics as Ben’s mother) have a wordless, seriously serious stare down.

I linger on this page as long as I can, making the “Crick!” from the woods on the next page (my daughter’s favorite) even more DRAMATIC.

“I didn’t normally talk to a Littlefoot,” explains Bigfoot, “But there was something about this Ben I liked. He was as determined fellow. I also liked his bike! I asked, ‘Mind if I take it for a ride?’”

A quivering, shivering Ben delivers in response the best line of the book to be read aloud: “‘Buh-buh-Bigfoot?’”

“‘AND MY DOG!’” who has abandoned Ben for much bigger, even furrier friend.

But, of course, this time nobody comes when Ben cries Bigfoot. Not even Ben’s mother.

And now it is pitch-black.

Bigfoot has disappeared into the woods with Ben’s bike and Ben’s dog, and, “Ben found being alone to be a little scary.”

Eventually (thankfully!) Ben gets his bike and his dog back. And on the rosy sunrise of the next day and the last page, Ben sets out with a video camera to get proof of his Bigfoot.

“What a tenacious fellow he is.”

We’ve been tenacious, too. I might have given this book up, let it drift to the back of the so-so book shelf, but day after day (really almost every day for the last four months) my kids have picked The Boy Who Cried Bigfoot out for me to read, and oh the details we have discovered.

In a good picture book, there are things to points at.

My kids point at this book.

At simple things like the “nunu!” Ben’s baby sister is sucking, to more thought-provoking things, like the handwritten text that has smiley faces with sharp teeth drawn into the letters that reads: “RRAAARGAR!”

My daughter points and asks, “What does this say?” because she knows that it is different and that I when I read it I will do by best to sound like a Bigfoot.

In a good picture book, there are things that make kids laugh.

In a good picture book, there is anticipation.

When we read The Boy Who Cried Bigfoot, my kids stare at me, waiting, begging, for the “Ding! Ding!” if I pause for even two too many seconds before reading it.

In a good picture book, there are words worth repeating.

In this book, my daughter repeats: “Buh-buh-Bigfoot” (I add an extra Buh).

“Buh-buh-buh Bigfoot!” Both while we are reading and at random times throughout the day—while she is getting dressed, playing in her kitchen, brushing her teeth, “Buh-(drool a little toothpaste)-Buh-Buh Bigfoot!”

After I read this line: “…I do know that Ben learned that importance of always telling the truth,” my daughter asks, “What’s truth?”

A good picture book is beautiful.

For me, as dark as the book first seemed, it is the rich colors of the sky/background of each glossy page that make it one of the most beautiful books in our collection.

So, even though I found some of the text tricky to deliver as a read aloud because much of the dialogue is isolated from the narration (in text bubbles or stemming from lines drawn to characters)…

And even though it is, “a little bit scary,” The Boy Who Cried Bigfoot is one of the most requested and most read books in our Picture Book House—and most likely because of it’s nonlinear text, it’s unpredictable narrator and, well, scariness.

Maybe introducing my kids to Bigfoot at ages two and three will help them not be like me, who at an age far too old to admit was still checking under my bed and in my closet for E.T.

One Response to “The Boy Who Cried Bigfoot: Monsters Part I”