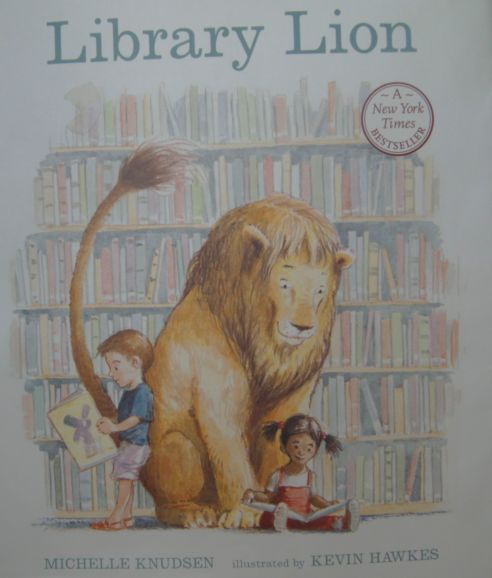 Mornings are not as they should be in our house. My almost-three-year old would sleep until 8 or 8:30 if we let her, and my 17-month-old gets up  sometime between 4:45 and 5:30 a.m. Ugh. Couldn’t they agree to meet in the middle? 6:15-6:30 seems like a perfectly reasonable time to start the day. What to do to transition the groggy, crabby three-year-old teenager from sleep to wake? What to do during those lonely, dark hours when nobody else is awake but you and the baby? There is only one answer of course: read.

My daughter, with her short blonde hair tangled and frizzy and sticking straight up looks like a lioness stretching and yawning in her bottom bunk (I mean den), and so it is fitting that I lift her out from under the sheets (sometimes it is more like a yank and a tug), wrap her up in a blanket taco and curl us both into an oversized chair to read Library Lion by Michelle Knudsen, illustrations by Kevin Hawkes (Candlewick Press, 2006). It’s this or Seasame Street, and while we love PBS, I’d rather start the day reading.

I bought this book for my daughter at Christmas, a bit ambitions of me, given that it must be at least 2,000 words–longer than many picture books being published these days and at risk of being beyond her attention span. But I couldn’t resist a book about a library, and furthermore, I’m a fan of picture books that follow a more traditional plot triangle–with real rising action, a climax and some sort of satisfactory resolution. I think many kids like a meatier story, too. At least mine proved she did.

Knudsen doesn’t waste any time getting to the heart of the matter: “One day, a lion came to the library,” reads the opening line. Soon thereafter we meet Miss Merriweather and Mr. McBee (what perfect names for librarians, don’t you think?), and at first they fit their stereotypes perfectly.  Libraries have rules that must be followed! This is so for Ms. Merriweather because she is head librarian and cares about the quality of her library. This is so for Mr. McBee because the way I read it, he is a bit of a grouch and a tattle-tale and probably wishes he could be Miss Merriweather. But he can’t. Because beneath her bun and behind her spectacles Miss Merriweather is kind-hearted, even cool, and she has no problem with a lion in the library–as long he doesn’t break any rules.

After learning the hard way that it is against the rules to roar (what lion wouldn’t roar to lament the end of story hour?) our lion shuts his trap and gets busy dusting the stacks with his tail and licking overdue notices with his giant tongue. Until one day…there is an accident, a roar, a shameful lion, a vindictive Mr. McBee. There is action that rises, climaxes and then resolves, ever so satisfactorily.

And by the end of it all, my daughter is no longer groggy, no longer crabby, and since the rest of us have already been up for hours, we start the day. Thanks, Library Lion.